An Actuarial Analysis of the Changing CAT Risk Landscape

The world’s climate is changing, and that change is impacting all areas of modern life. According to the World Economic Forum’s 2022 Global Risks Report, the climate crisis “remains the biggest long-term threat facing humanity.” In fact, environmental exposures occupy five of the ten slots in the report’s “top 10 global risks by severity,” including each of the top three. (Figure 1) 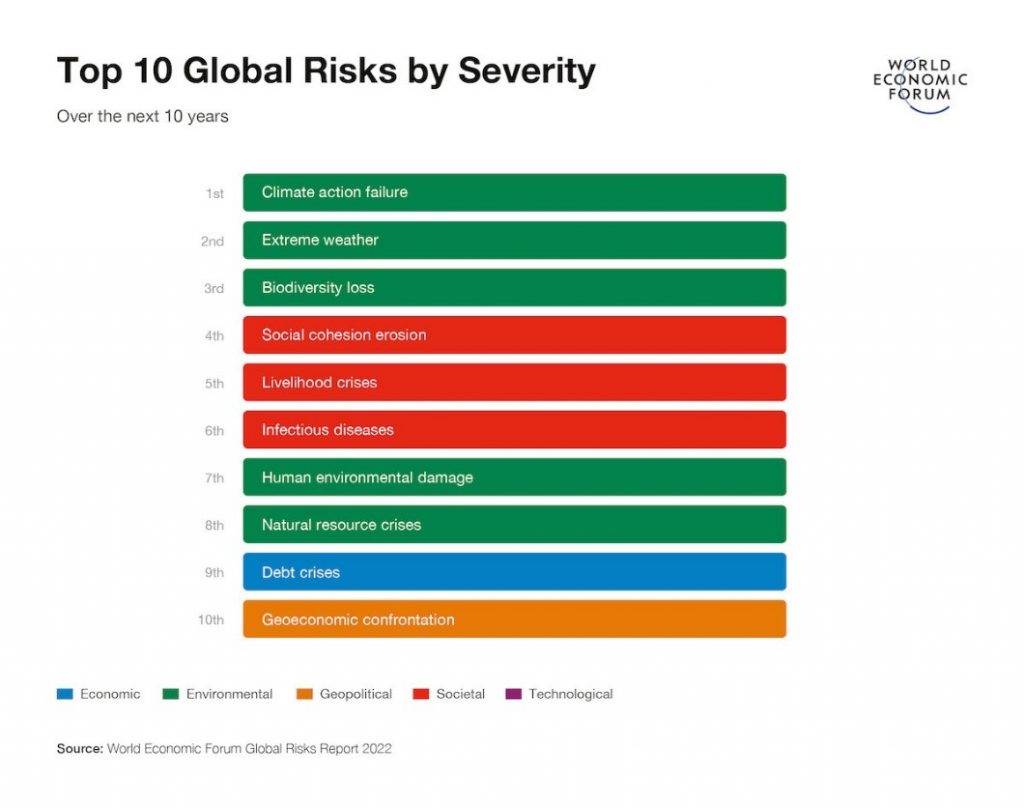 With actuaries being experts at assessing risk, and climate impacts having significant importance to the global insurance industry, The American Academy of Actuaries, the Casualty Actuarial Society, the Canadian Institute of Actuaries, and the Society of Actuaries jointly funded a research project to develop and maintain “The Actuaries Climate Index” (ACI). The ACI was developed and launched in 2016 to provide information about changes in the frequency of extreme climate events in the U.S. and Canada.

The index is based on six components:

These six components are combined in a single index using appropriate standardizing methodologies – with the result intended to measure climate risk by objectively compiling observations of extreme weather and sea-level changes. The graph below shows the seasonal five-year moving average of the individual components and the overall ACI. The only declining index over that period is the frequency of temperature below the 10th percentile, but the impact of a decrease in this index is an increase in the ACI.  Fewer cold extremes are related to the increased melting of permafrost and the problematic issues that result.

The most recent release of this index, with data through August 2021, displays a continuation of this increasing trend, with the ACI now at 1.2 relative to the average of 0 for the 1961-1990 reference period.

This increase points to more and stronger hurricanes and tornadoes, prolonged wildfire seasons, and heavier precipitation leading to increased flooding. These trends, coupled with population shifts to areas that may be more affected by these catastrophes, illustrate why the financial impacts of catastrophes are exploding for insurers.

While the Actuarial Climate Index is limited to the United States and Canada, other sources provide consistent information across the globe.  According to OurWorldInData.org, worldwide natural disasters have demonstrated an upward trend in total economic damages as a share of GDP over the past six decades. In Australia, the national science agency CSIRO, in conjunction with the Bureau of Meteorology, produced the State of the Climate 2020 report. This report documents a warming climate and decreased rainfall across the country. As a result, wildfires have been more extreme, and the fire season has lengthened.  In 1938 the country experienced its first mega-fire, defined as a fire consuming more than one million hectares.  There was not another mega-fire in the country until 2001, but there have been three in the 20 years since. The ‘Black Summer’ of 2019-2020 saw Australian wildfires burn more than 18 million hectares, destroy more than 3,000 homes, and kill 450 humans, and nearly 3 billion animals, in the country.

The expected increased evaporation in the Earth’s water cycle due to climate change means that some areas will experience a “drying out” and have increased exposure to catastrophic wildfires as a result.  On the other hand, it also means that storm-affected areas are likely to have more intense storms and an increased risk of flooding.

In western Europe, catastrophic flooding took place in July of 2021, as two months of rain fell in just two days.  Germany, Belgium, and the Netherlands suffered devastation as entire towns were washed away.  This disaster claimed 240 lives and led to insured losses of $11 billion. Scientists have since assessed the influence of climate change on this event and generally believe the Western Europe region will see events like this occurring more frequently in the future.

In the United States, because of increasing hurricane severity, the National Science Foundation has provided funding to Florida International University’s Extreme Events Institute to design a testing facility for storms with sustained winds of 200 mph. The Saffir/Simpson Hurricane Wind Scale used to categorize a storm’s maximum wind speed presently has a top tier of Category 5, which includes all storms with maximum winds greater than 155 mph and the current testing facility can generate winds of up to “only” 160 mph. The scientific consensus is that we will experience more intense storms in the future, and the new facility will help test infrastructure and building codes to create more resilient communities in our expected future environment.

So, what does all of this mean for insurance providers?  Insurance is a mechanism to mitigate risk. As risks become more extreme, insurers must be prepared to help protect insureds’ financial resources.   This can be done through better mitigation efforts across the insurance lifecycle.

Some key steps insurers should take in these changing times include:

By following the above guidelines, you will be able to maintain rates that are appropriate for your book of business in the changing risk environment. Additionally, when a catastrophe does occur you can ensure your reserves are adequate.

For more on the evolving CAT landscape and insurance operations check out these posts:

Betsy Branagan is VP, head of reserving and claim analytics for the actuarial and analytics team at Xceedance. She can be reached by email at contact@xceedance.com.